Message from the President of Afghanistan 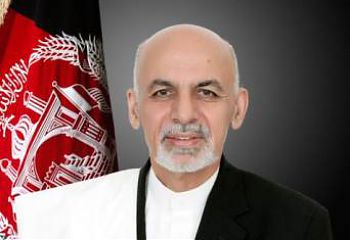 Tab: A Transformation in Progress
A Message from His Excellency the President of Afghanistan Mohammad Ashraf Ghani
The legacy of 40 years of violence in Afghanistan has been complete violation of the social contract between the government and the Afghan people, which is the bedrock of a successful democracy. We were left with gutted institutions, destroyed infrastructure, a culture of corruption,
no rule of law, entrenched mafias, an obliterated economy, and the seemingly impossible task of rebuilding.
In 2014, the National Unity Government initiated a comprehensive reform agenda to set the Afghan nation on the path to self-reliance, connectivity, and prosperity. Now in 2018, we are half-way through this Decade of Transformation.
The country’s evolution from one of destruction to one of a functioning democracy that places its citizens at the heart of government is a transformation in progress.
We have a long way to go, but we have laid the necessary foundations.
To chart us on a path to self-reliance and economic growth, we have successfully implemented a series of fundamental fiscal reforms—creating a transparent national budget in consultation with local government and citizens, instituting systems of public financial management to ensure effective and efficient use of public funds, and practicing realistic budgeting in line with national priorities. The economy grew steadily in 2016 and 2017 by about 2.5%, and revenue collection exceeded the projected annual growth rate of 12%.
Unchecked and rampant corruption posed a major risk to national stability and destroyed the Afghan peoples’ trust in their government over the decades. It is no longer tolerated or encouraged, and we have created a culture of shame around abuse of power. The Penal Code was revised in 2018 to criminalize corruption, a first for Afghanistan. The Anti-Corruption Justice Center, set up in 2016, has prosecuted over 100 high-ranking government officials involved in corruption. Over 9,000 senior level government employees have publicly declared their assets. The National Procurment Authority, established in 2014 to centralize procurement processes and safeguard it from corruption, has saved the national treasury nearly 900 million USD that would have otherwise been swindled in corrupt deals.
Corruption also crippled the performance of our nation’s pride, the brave Afghan National Defense and Security Forces (ANDSF). Reforms to improve management and procurement, and install a young, qualified cadre of professionals in the leadership have been implemented over the past years, improving the ANDSF’s battlefield performance in both 2016 and 2017.
Just 18 years ago, we were a country practically without electricity, but today we are leading the region in cross-border energy development. We have successfully reclaimed Afghanistan’s unique role as the roundabout of Central Asia, and the bridge between energy-rich Central Asia and energy-poor South Asia, emerging as a leader amongst our neighbors in key regional energy projects, including CASA-1000 and TAPI, of which we will all soon reap the benefits.
While major energy and mineral projects will provide the domestic revenue to boost our economy in the long-term, the Afghan people are faced with drought and many still living in severe poverty. The Citizen’s Charter National Priority Program , the government’s flagship national development program, has empowered the Afghan people to make decisions about delivery of government services in their own communities, including healthcare, education, infrastructure, clean water, and human capital development. It addresses the roots of poverty, and empowers those living in it to prioritize the needs of their

communities. The program has reached over 8 million Afghans in all 34 provinces, and continues to expand.
What is happening culturally in Afghanistan is of equal importance to the technical and programmatic reforms we are implementing as a government.
The backdrop of reform is a far-reaching cultural change at every level.
Young people, belonging to the generation that grew up during the darkest years of violence, represent the vast majority of Afghanistan’s population, and we have empowered them in positions of leadership and responsibility in the National Unity Government. Afghan women, who were denied their rights for two decades, have risen to reclaim their rightful roles in government and every level of society, and proven to be our most valuable assets. Today we have more women in government than ever before in Afghanistan’s history, and women make up 48% of village council members.
This generations of Afghan women and men are showing their fellow citizens that the government can and must deliver for the Afghan peoplemand in the national interest, and they are challenging the Afghan people to expect and demand more from their government, and hold their
leaders accountable.
I am confident that this generation will be the one which secures Afghanistan’s future. Reforms to improve service delivery, cut corruption from government, and install transparent systems are our only insurance that peace, once achieved, will actually be sustained.
To secure Afghanistan’s future, we must ensure that the progress we have made in reforming our systems of government is maintained, expanded,
and protected.
The next five years of the Decade of Transformation will no doubt see continued challenges and suffering. Our people suffer daily at the hands of terrorists with international ambitions, insurgents with regional support, and natural disasters with which our country is not yet able to cope. Yet the prospects for peace have never been better, and we continue to work toward a peace process. As we do so, we remain focused on the critical task of implementing reforms, so we can ensure that when peace is reached, we will have the foundation to sustain it.